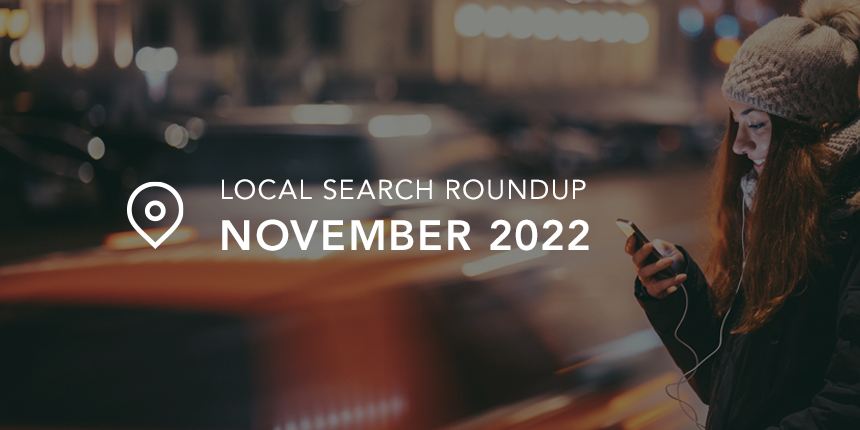 The holiday season is here and the pace of change is picking up in local search. Now is the time to catch up with all the news you need to know from one of the fastest moving fields in digital. Let’s get started!

Google rarely launches new features during the holiday season because unexpected ranking fluctuations are the last thing businesses want to see during the golden quarter. Even so, the search giant couldn’t help itself this year as it revealed updates in Search, Shopping, Maps, and even Lens that some users in the US are seeing in beta right now.

Study: The first 10 reviews in Google are the most vital

All this year and last, Google pushed to make its search engine one of the world’s top review platforms. As users become accustomed to relying on Google reviews before visiting a business, the search giant has in turn made its reviews vital to ranking visibility as well.

A recent local presence management study has shown that for a new business location, the first 10 reviews have the biggest positive impact on rankings. Although those below the 10-review threshold rarely appear in competitive searches, they have the potential to break into the local three pack when their review count finally reaches double digits.

Diminishing returns come from each individual review after that point, but that is not due to reviews no longer being impactful on rankings. Instead, it is because the first 10 reviews give a disproportionate boost compared to many other listing optimisations. If you are a new business or simply a brand opening an additional location, focus heavily on that first batch of reviews containing plenty of positive sentiment.

Google did not become a top review platform simply by increasing its sheer volume of reviews, but by engaging in careful moderation and spam detection to ensure its reviews remain trustworthy. To further fight back against spam and bad actors, Google can now display a reviewer’s review count within the city or category of the business they are reviewing. For reviewers who comment on businesses outside of their usual city or frequented places, their profile may now suggest their feedback is spam or otherwise inauthentic. For business owners who want to flag dubious or low-quality reviews, this snapshot will act as evidence for Google to possibly take action.

Along with the total number of reviews impacting rankings, a new study has confirmed that review recency impacts rankings. Google revealed in past studies that users do not consider reviews over 90 days old to be relevant, which actually led to the Google ranking algorithm devaluing listings without fresh reviews.

Ranking data now indeed shows that there is a direct correlation between new reviews and ranking visibility. More importantly, if your competitors receive new reviews on a weekly, monthly, or any regular interval, your business will likely be held to the same standard. Whatever your local search goals may be, fresh reviews are a must.

From targeted review generation to full-service listings management, we can help you get ahead of the game in local search. Let’s talk!